The Maldives Marine Big Five are a talking point in the Maldives giving rise to many conversations among eager tourists who come to visit this marine-rich archipelago. What are the big five of the Maldives marine world and where can you see them? Those are the questions being asked. When it comes to what they are, generally divers and snorkellers consider the Maldives Big Five to be manta ray, eagle ray, sea turtles, dolphins and of course, sharks. 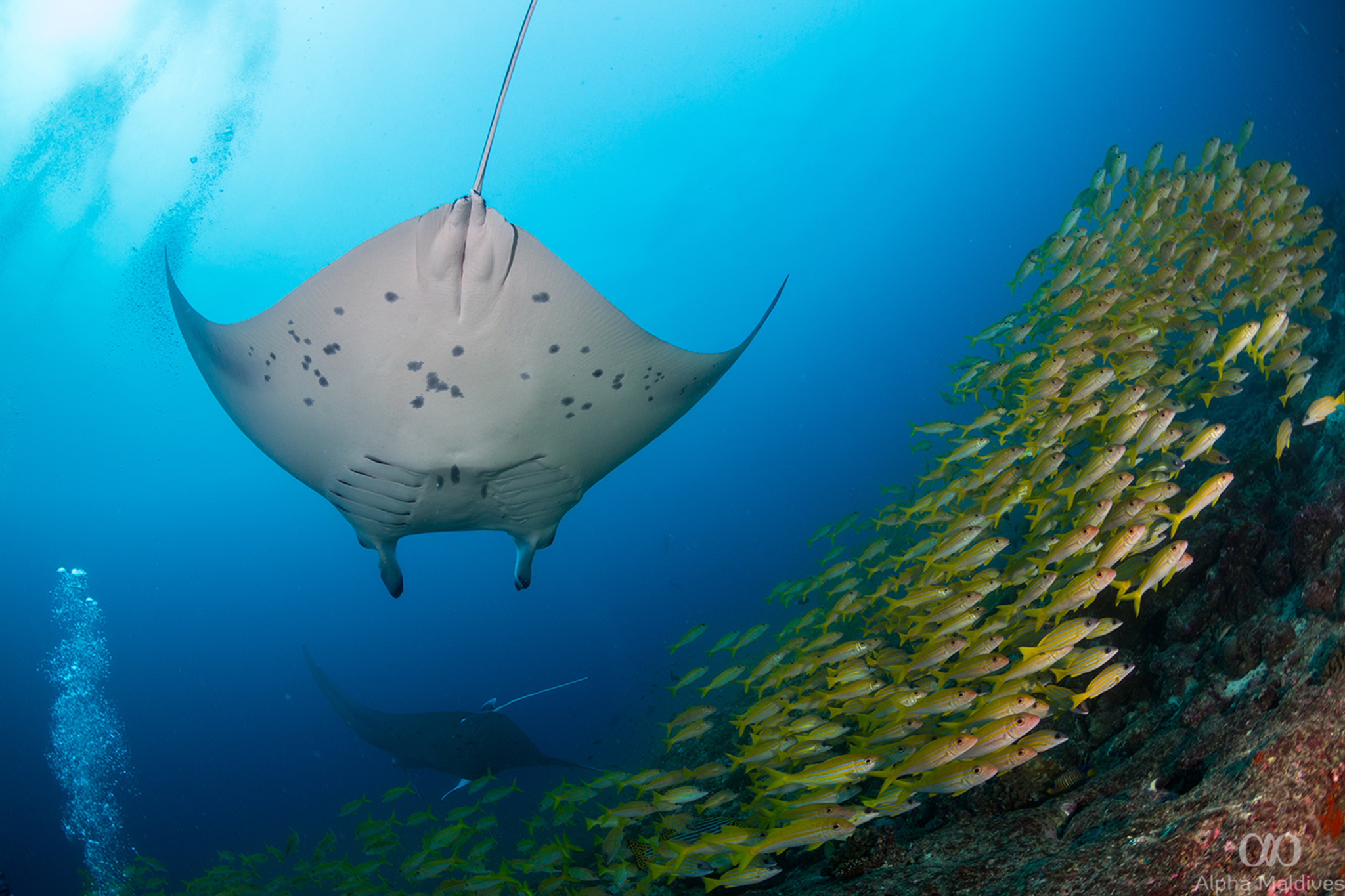 Eagle rays are often found in the open ocean. Rhomboidal in shape with a slightly longer tail than other rays, the most spectacular is the spotted eagle ray. They grow to about 5m in length but their most dramatic feature is a dark inky body covered with white speckles.

There are seven species of sea turtle, of which five can be seen in the Maldives. The single most important thing you need to know is that they are an endangered species and are protected by law in the Maldives. The Hawksbill turtle and the Green turtle are the most common turtles sighted. Marine conservationists have embarked on a turtle identification process, gathering photographs from both experts and amateurs alike to try and establish the numbers and movement of these special creatures of the sea.

It is believed that 20 difference species of dolphin call the Maldives home. These include Spinner, Bottlenose, Risso’s, Spotted and Striped Dolphins.  The most common seen in the area are Spinner dolphins which are said to number thousands. They gather in droves to feed on the fauna and are a magnificent site when frolicking in huge groups in the waters around the islands. They may just be the first of the big marine 5 that you get to spot.

Probably the most feared and mysterious of the Marine Big 5 has to be the shark. The largest fish in the world is the Whale Shark. Growing up to 11 or 12 metres in length and weighing up to 19000kg in adulthood, they are a sight to behold. They live to about 70 years and are believed to be harmless to man. With a 1m wide mouth, whale shark are filter feeders (mainly on plankton) and are said to be able to have more than 300 rows of teeth at one time.

That’s what you are looking out for on your visit to the Maldives. Where best to see them? The Baa and Ari Atolls are well known for shark and manta sightings. The Sun Island reef is a good spot for whale sharks, while the reefs of Rangali provide ample sightings of both whale shark and manta ray. Ukulhas Thila and Panettone are also said to be great for manta ray viewing.  Dolphins can often be seen frolicking in the ocean throughout the island chain. The Marine National Sea Turtle Identification Programme has had sightings and photographic evidence of turtles spotted on 16 atolls.

Your tour guide will be able to let you know where the latest sightings of the Maldives Marine Big 5 have been. If you spot one or all five, it is sure to be a most memorable experience.